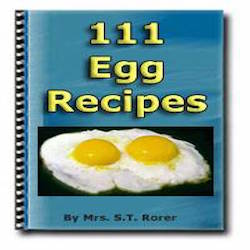 Any single food containing all the elements necessary to supply the requirements of the body is called a complete or typical food. Milk and eggs are frequently so called, because they sustain the young animals of their kind during a period of rapid growth. Nevertheless, neither of these foods forms a perfect diet for the human adult. Both are highly nutritious, but incomplete. Served with bread or rice, they form an admirable meal and one that is nutritious and easily digested. The white of eggs, almost pure albumin, is nutritious, and, when cooked in water at 170 degrees Fahrenheit, requires less time for perfect digestion than a raw egg. The white of a hard-boiled egg is tough and quite insoluble. The yolk, however, if the boiling has been done carefully for twenty minutes, is mealy and easily digested. Fried eggs, no matter what fat is used, are hard, tough and insoluble. The yolk of an egg cooks at a lower temperature than the white, and for this reason an egg should not be boiled unless the yolk alone is to be used. Ten eggs are supposed to weigh a pound, and, unless they are unusually large or small, this is quite correct. Eggs contain from 72 to 84 per cent. of water, about 12 to 14 per cent. of albuminoids. The yolk is quite rich in fat; the white deficient. They also contain mineral matter and extractives.

Oops, you forgot something.

The words you entered did not match the given text. Please try again.

Reply Alma Murphy
10:07 PM on February 29, 2020
According to me, the HP is the top most producers of these toners. Like the https://aussiessayservices.com/myassignmenthelp-com-review/ their quality will never suffer. Even on rough pages, you can get the best printing result. While, in other cases, this thing is impossible to get.

Reply Donald
2:51 AM on August 15, 2017
Thanks for sharing. This is very helpful for me. I read a article on best writing service about this. I followed the instruction and i reached my goal.